An interesting narrative adventure held back by unrealised potenital. 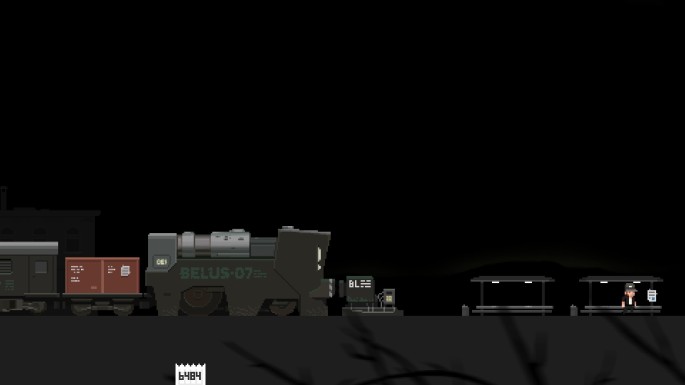 The Final Station is a mixed bag, on one hand it’s got a intriguing story, stunning background imagery, excellent atmosphere building and an effective soundtrack. On the other hand, its gameplay can be shallow, the story can be far too obscure at times and a fair amount of designs, both characters and the environment, lack the same attention shown in the background. Despite its flaws, I still enjoyed my time with Do My Best’s apocalyptic adventure, as short as it was.

Gameplay in The Final Station consists of travelling through various stations broken up by brief moments of micro-management on board your train. Exploring abandoned stations makes up the bulk of the game, tasking you with navigating a labyrinth of corridors, often infested with shadowy monsters. The way each level is designed can make encounters with the infected feel more like a puzzle at times, encouraging you to find the optimal strategy to conserve ammunition. Health is a limited resource, taking only a few hits to be killed unless you spend a precious medkit to heal. Damage doesn’t matter much, disappointingly so, as you’ll just respawn a few rooms back, taking much of tension away from fighting the infected.Despite these flawed mechanics, this is where the game is at its best.

In stark contrast to this are sections where you travel between stations, where almost nothing happens. While waiting until the next station, passengers require constant babysitting or else they’ll die of starvation, on train rides that really don’t seem that long. The trains also likes to fall apart, leaving a few more things to do in an otherwise  The gameplay here is practically irrelevant, to the point where I was paying more attention to the backgrounds.

Keeping passengers alive was a hassle, the only point being rewards such as supplies, upgrades or money for at the incredibly few stores in the game. I could often find enough supplies myself through thorough searching, so keeping most survivors’ health and hunger metres topped up was practically pointless. Aside from the insight into the world gained from passengers talking to one-another, there really is no incentive to keeping survivors alive, leaving the sections between stations a chore more than anything else.

The presentation really shows how much of a mixed bag The Final Station, at least in the visual aspects. Positives first, the background imagery is beautiful, especially when travelling between stations. I often found myself neglecting the train and passengers because I was engrossed by the landscapes. That being said, the artwork in the foreground was disappointing, lacking detail in assets and animation, especially the character assets. The enemies look suitably disturbing though, shadowy beings that still look recognisably human enough.

The game manages to use its limited detail and effects available to create some thrilling atmospheres at times, adding a feeling of claustrophobic dread as you navigate the unknown corridors. The musical score is pretty neat as well, making the failing world feel just a little bit more sombre.

The story is vague, to say the least. Essentially, you play as a train conductor travelling around while the apocalypse happens. The game almost only ever gives you information about your current objectives, rarely providing any worldbuilding details. There’s an interesting world to discover underneath this, for sure, but if you want any lore in The Final Station, you have to find it for yourself. The game encourages you to piece it all together through various notes paying attention to conversations between passengers, but even then I was left with too many unanswered questions when the credits rolled. After scouring every level for anything about the lore, my only reward I was left with was speculation and theorycrafting.

I have very mixed feelings about The Final Station, its story was interesting but the ambiguity just frustrated the hell out of me. The level design was quite clever at times which helped level out its otherwise shallow mechanics.Its presentation was inconsistent, with the background landscapes often being more interesting than what’s going on in the foreground. I did find The Final Station to be an engaging game, it’s just a shame it doesn’t delve deeper into its mechanics.